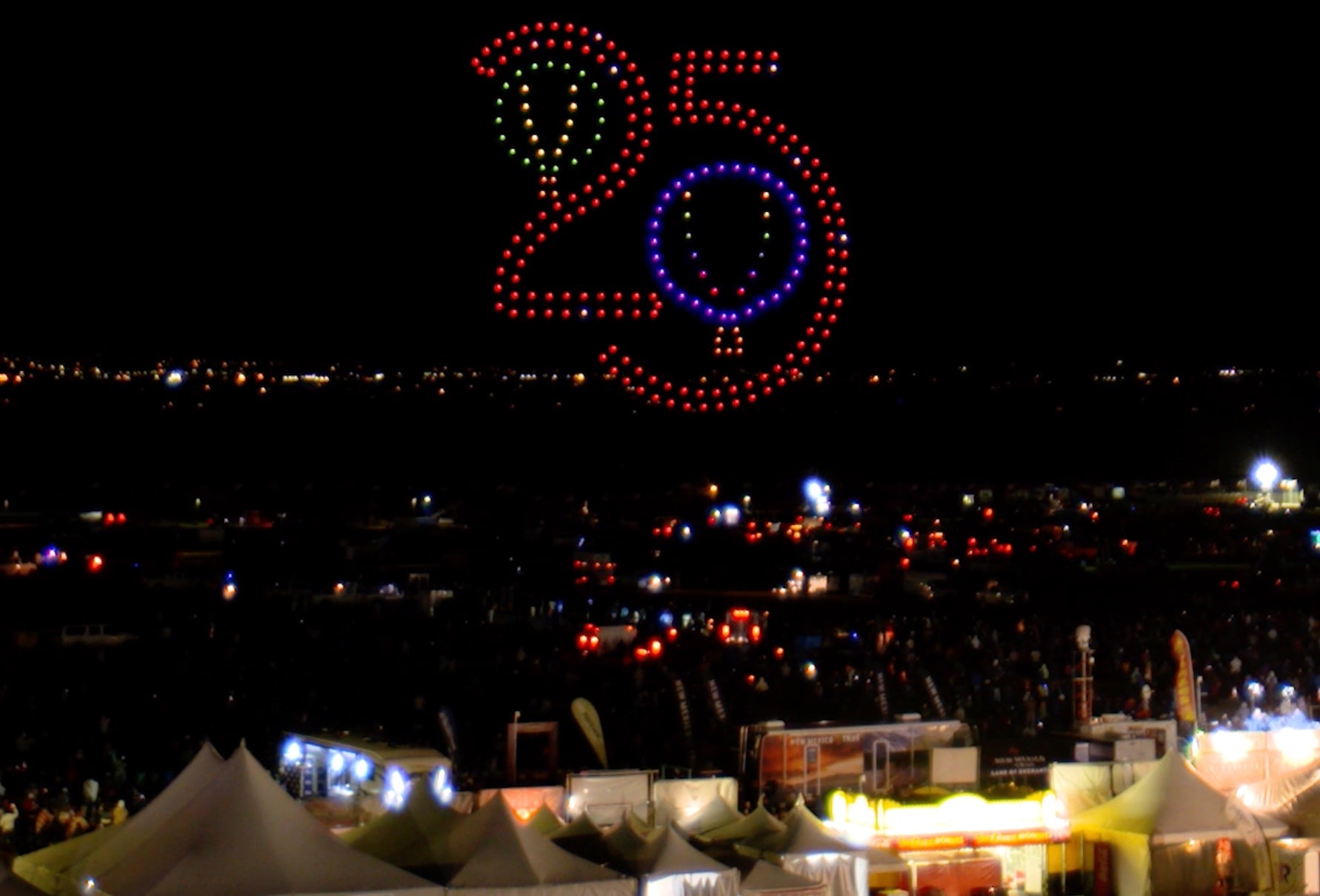 A festival celebrating the earliest form of aviation was complemented by the very latest in aviation technology, when drone show specialist Verge Aero flew a series of spectacular light shows for the 50th anniversary Albuquerque International Balloon Fiesta (AIBF) in New Mexico.

Known as “the most photographed event in the world”, the AIBF is a leading celebration of the oldest human aviation technique, the hot-air balloon, pioneered by the Montgolfier brothers in 1783 and capturing imaginations ever since. This year, the spectacle attracted around 900,000 visitors over its eight-day run in October – and the organisers were, as ever, pushing the boundaries of entertainment for their awe-struck audiences.

“We’ve been interested in drones since we first saw them a number of years ago at Superbowl Half-Time,” says AIBF Executive director Paul Smith. “The cost was just outrageous; we couldn’t afford to do it. Now, we’re so happy that we’ve met Verge Aero and Nils Thorjussen – they’ve brought the cost down to a level we can afford, and it’s wonderful!”

Although one flight was cancelled because of a thunderstorm, the 11-minute show, featuring 300 drones and pre-programmed by the Verge Aero team, flew eight shows at night and mornings just before launch of the Dawn Patrol balloons. As well as ballooning and aviation emblems, the aerial display included touches of humour, with the familiar forms of Roadrunner and Wile E. Coyote (thanks to Loony Tunes). Smith comments, “When people see fireworks, you get the ‘oohs’ and ‘aahs’ – but when they’re watching the drone show, they’re always a little more animated!”

Verge Aero’s modern aviation expertise even saved the day several times when the wind put a stop to ballooning and fireworks. On these occasions, thanks to their robust design, GPS positioning technology and wind-tolerance, the drones were the only entertainment in the sky. Smith says, “The event is very weather-dependent, and we’ve had some challenges this year. That was one of the great things about Verge Aero’s drone show: even when we had 15mph winds, gusting to maybe 20, the drones went up. That surprised me, because I didn’t think they had that kind of capability, but they were rock-solid – their show was perfect.”

Nor were there any rough edges visible from a management viewpoint. Smith explains, “At any event when you do something new, there’s a learning curve . . . With Verge Aero – and I hate to sound clichéd – but it’s been totally seamless. We gave them the spot, they came in, they did the show – and they were pleasant about it! There’s been no work on our part – they do it all themselves.”

Nils Thorjussen, CEO of Verge Aero, says, “It was awesome to be part of such an iconic event. Working together with the organizers, we created unique, dynamic content that continuously evolved and kept the audience engaged and told a great story. This show really highlights how drone shows are a compelling art form that can be integrated into a wide variety of applications.”

All in all, Verge Aero’s drones left quite an impression. “All the old-time pilots I’ve been speaking to here think it’s just the coolest thing we’ve ever done. Luckily, when I speak to the guys at Verge Aero, they think the balloons are the coolest thing they’ve seen – so it’s a good symbiotic relationship!” laughs Smith.

He adds, “I don’t want to hurt myself in future negotiations, but I hope they come back for a number of years!”