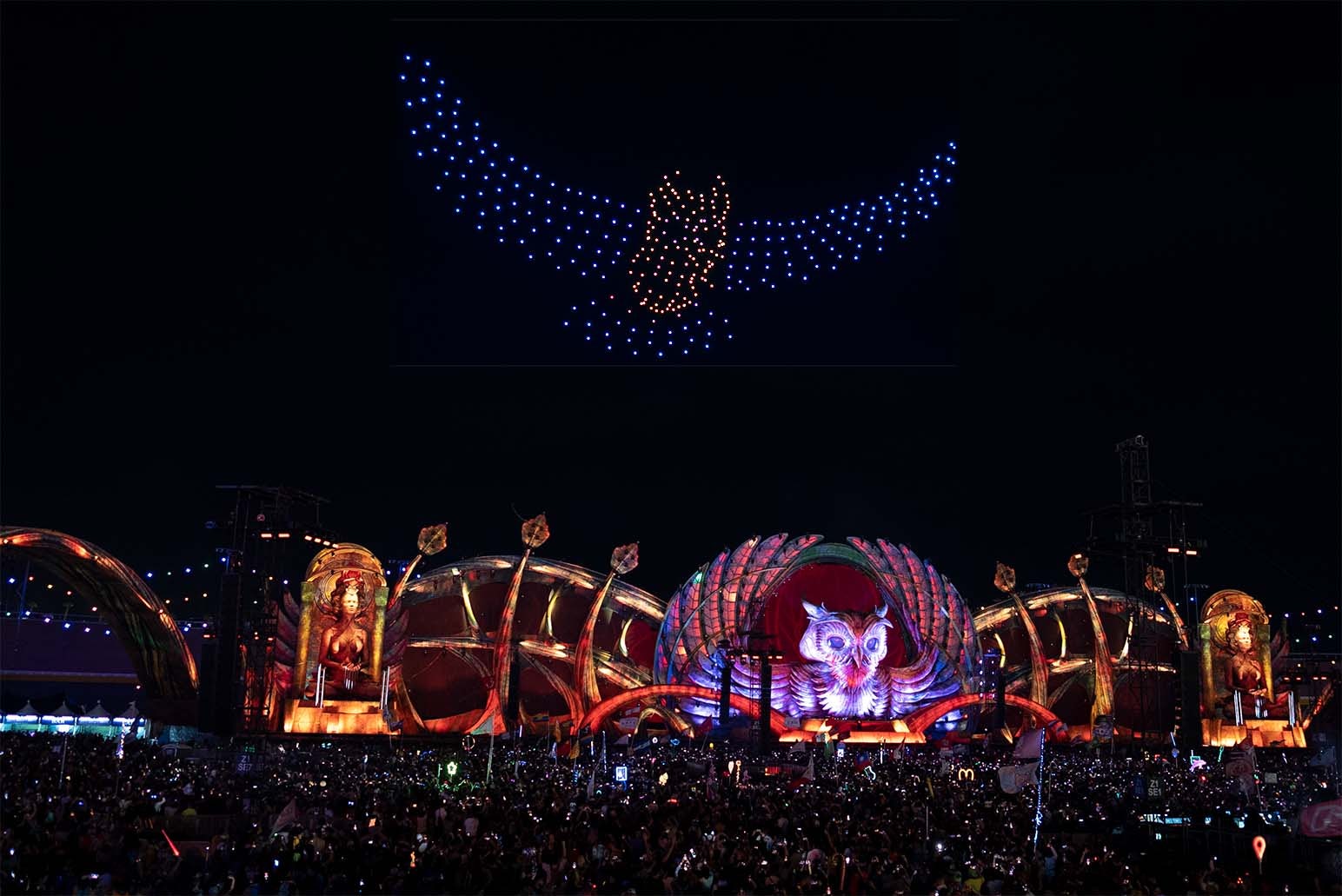 “We figured that we needed to do something special for our 25th anniversary, so we came up with a drone show, with next level designs,” says Rutger Jansen from Insomniac. “Working with Drone Stories is really easy because we have the same mindset. We wanted to take this further than what everybody else is doing.”

The drone show for EDC 25 was the result of a longstanding relationship between Lucas van Oostrum, owner of Drone Stories, and Jansen, and followed two years of discussions and planning. The Insomniac team had also recently seen Verge Aero’s drones in action at the San Bernadino event, Day Trip, which took place over Fourth of July weekend 2021 and, as Verge Aero’s Nils Thorjussen says, they had been “impressed”.

Drone Stories then developed designs for the drone show, using its own fleet of 600 Verge Aero drones, which it says are “flawless”. Drone Stories is known for its collaboration with DRIFT on the Franchise Freedom starlings murmuration drone art piece, and for orchestrating magical drone shows for clients like NASA, Disney, and Samsung.

“Verge Aero has been a great supplier of the hardware, they fly very precisely and form a canvas on which we can create our stories,” says Lucas van Oostrum. “This is due to both their weight, and the RTK GPS which are built in the drones. The drones keep correcting themselves in the air, so that they can accurately execute complex and dynamic flightplans.

“The main challenges were around the number of drones, the coordination of such a large team operating on the show, and on the timing of the show. We needed to fly at a set time, which could not be a second earlier or later. This means that if a drone has not picked up their signal, we need to fly without it. Usually, we can wait and go five minutes later, but in this case the music at the stage would already have started, so we would not be synced if we waited. Our technical team has made this timing perfect.”

“We delivered 600 drones at exactly the right second via timecode trigger,” says Thorjussen. “It’s a nice validation of our technology and roadmap. We have designed the Verge Aero drones and programming to make it possible to execute bigger shows in a safe and efficient manner. The system has been designed from first principles to scale and we’re now doing it. It’s very rewarding to see it all come together.”

van Oostrum continues: “The Verge Aero team is very flexible, fast, experienced and thoughtful which makes working with them a pleasure. Also, our teams fit well together with the pilots, which means that we together have a very efficient way of working, to execute the shows successfully.”

The drones’ pilot on the night was Verge Aero’s Director of Show Operations, Mason Hayes.

The drone show prompted scores of positive reactions online and in the EDM press, with revellers taking to social media to share what they had seen. One commented, “the craziest sky show I’ve ever seen … the effects they pulled off were pretty crazy. I’ve never seen anything like it before.”

Dance music bible EDM.com raved about the show on their site: “As attendees decompress the surreal weekend and the memories begin to crystalize, one will go down as a timeless ‘you had to be there’ moment: the drone show. In a music festival that featured the world's best DJs and more fireworks than a Fourth of July bash at the White House, the unquestioned pièce de résistance was the coordinated drone performance.”

The Drone Stories and Verge Aero team also flew three shows at EDC Orlando in mid-November. “Every drone took off and did exactly what it was supposed to do,” adds Thorjussen. “This is quite a technical feat. Most of the time when you look at drones shows, there are pixels missing or abnormalities of some kind. Earlier in our development, this was the case with us as well. But we continue to evolve our technology and capabilities so shows get better and better. Perfection is now the standard.”